Why D7 is Superior to other Products for Disinfection of SARS-CoV-2 D7 is an aqueous-based disinfectant that can rapidly neutralize highly toxic chemical and biological materials. The formulation:

D7 contains surfactants, mild solvents, inorganic salts, a low concentration of hydrogen peroxide (~3.5%), a hydrogen peroxide activator, and water. The surfactants soften the cell walls of pathogens which allows the activated peroxide to penetrate to the interior for complete kill. This unique combination of mild ingredients works synergistically to kill persistent biological pathogens which has been demonstrated in testing at government and private facilities and in many field applications – outperforming formulations that contain much harsher chemicals. D7 is registered by the U.S. Environmental Protection Agency (US EPA) for many pathogens such as Listeria, E. coli, Staphylococcus, Salmonella, Norovirus, the Porcine Epidemic Diarrhea Virus, Staph and Pseudomonas biofilms, Avian Influenza viruses as well as Emerging Viral Pathogens.

D7 can effectively inactivate coronaviruses. D7 has demonstrated effectiveness against viruses similar to Coronavirus or COVID-19 on hard, non-porous surfaces. Therefore, D7 can be used against COVID-19 when used in accordance with the directions for use against Norovirus on hard, non-porous surfaces. Refer to the CDC website at https://www.cdc.gov/coronavirus/2019-ncov/index.html for more information. D7 can effectively be used to disinfect facilities against SARS-CoV-2 – even with high organic or soil loads.

D7 is currently being extensively used worldwide to combat COVID-19 with excellent results. Over 1000 tons of D7 have been used in medical facilities and other facilities in China and other countries in the last two months to successfully disinfect the SARS-CoV-2 virus. According to medical personnel in China, it is the only disinfectant that seems to work against SARS-CoV-2. It is also being successfully used for disinfection operations in virtually every other country with significant numbers of COVID-19 cases and also in countries without many cases where disinfection operations have been stepped up to prevent the spread of the virus.

Why is D7 a superior disinfectant for SARS-CoV-2 as compared to many other products? The primary reason is that, in real world applications, SARS-CoV-2 does not exist alone. When airborne, SARS-CoV-2 is almost always surrounded by and protected by bodily fluids (e.g., saliva, nasal mucous, etc.) which makes it very persistent in the environment. When it lands on a surface, the situation is even worse because SARS-CoV-2 is also protected by organic material and soil on those surfaces making it even more persistent. In addition, the genetic material in the SARS-CoV-2 virus is surrounded by a lipid envelope (i.e., an oily material). The detergents and mild solvents in D7 cut through the bodily fluids, soil/organic material, and lipid envelope so that the hydrogen peroxide and activated hydrogen peroxide in D7 actually reaches and destroys the virus. Other disinfectants are repelled or inactivated by the bodily fluids, soil/organic material, and lipid envelope surrounding SARS-CoV-2 and never actually come in contact with the virus so it survives. Many of these other disinfectants pass laboratory tests against viruses in artificial conditions but fail in real-world applications. For example, 10% chlorine bleach achieves high efficacy against pathogens in laboratory tests but often fails in the field because it does not penetrate organic matter. The superior action of D7 in the presence of organic materials is illustrated in Figure 1 below (note that the actual SARS-CoV-2 virus is even more complex than what is shown in the figure and contains a virus protein coat [i.e., capsid] making it even more important to use a disinfectant such as D7 to penetrate this coat and reach the RNA).

Figure 1: The detergency and low surface tension in D7 allows it to penetrate organic matter and bodily fluids to reach and destroy the SARS-CoV-2virus.

The second reason why D7 is a superior disinfectant for SARS-CoV-2 is that it has very high efficacy against a large spectrum of pathogens, including SARS-CoV-2. Efficacy in disinfectants is measured by log kill as shown in Table 1 below:

*Note that the efficacy estimates are not intended to include all disinfectants but only examples of low efficacy and high efficacy products.

Unfortunately, many government organizations and others are promoting the use of low efficacy disinfectants in the battle against COVID-19. For example, most hand sanitizers use ethyl alcohol as their primary disinfecting ingredient. Other products may only contain quaternary ammonium compounds (i.e., quats) that also have relatively low efficacy. Using these types of disinfectants (and others with low efficacy) may present a significant problem because the large number of SARS-CoV-2 viruses deposited on a surface from the cough or a sneeze of an infected person may overwhelm these low efficacy disinfectants leaving infectious viruses behind even after disinfection operations. Recent research (Pan et al., Viral Load of SARS-CoV-2 in clinicalsamples, The Lancet, 20:4 [pp. 411-412], February 24, 2020) has shown that COVID-19 patients may have very high levels of SARS-CoV-2 viruses(i.e., viral load) in their upper respiratory system that could be expelled during a cough or sneeze. The sizes of a droplet expelled during a sneeze variesfrom <10 m to as large as 1000 m (Han et al., Characterizations of particle size distribution of the droplets exhaled by sneeze, Journal of the Royal Society, 10:88, November 6, 2013). Based on the data from these two studies, the number of SARS-CoV-2 viruses expelled during a sneeze from larger sized droplets (i.e., droplets that are likely to land on a surface) and the associated results of low efficacy vs. high efficacy disinfectants under various conditions (i.e., best case vs. worst case scenarios) are summarized in Table 2 below: 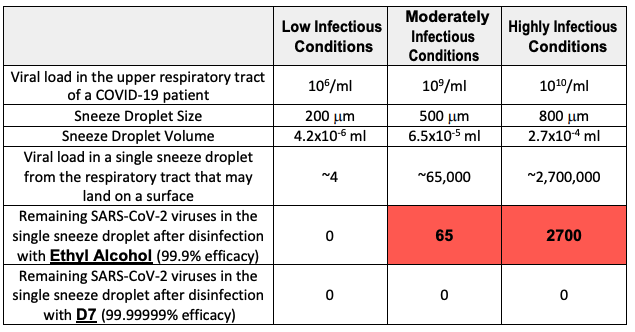 As can be seen, use of low efficacy disinfectants (such as ethyl alcohol or quats alone)may leave infectious SARS-CoV-2 viruses on the surface which can lead to the possibility of new infections in people that come in contact with these surfaces or fomite transport (i.e., transport on shoes, clothing, equipment, etc.) to other surfaces and areas. The situation is likely worse than shown in Table 2 because, as noted above, disinfectants utilizing ethyl alcohol and even those containing chlorine bleach may not even achieve their maximum efficacy in the field because of the presence of bodily fluids and other organic matter. However, the situation is quite different if D7 is used because its higher efficacy can effectively destroy all the SARS-CoV2 viruses in the sneeze droplets on the surface –even in highly infectious conditions.

An ideal disinfectant for field applications should have low toxicity and low corrosivity properties so that it does not harm people or property and it should be biodegradable so it does not harm the environment. In addition, an ideal disinfectant should have low odor and off-gassing properties after application so an area can be quickly re-occupied and re-used after operations are complete. Unfortunately, many disinfectants such as those that contain chlorine compounds (e.g., sodium hypochlorite [chlorine bleach], hypochlorous acid, sodium dichloroisocyanurate [dichlor], sodium trichloroisocyanurate [trichlor], and chlorine dioxide) and those that contain peracetic acid are often toxic, corrosive, and give off strong odors during and after application. These types of disinfectants may require rinsing and/or long ventilation times after use before personnel can re-occupy the area. D7, however, is very different. The mild ingredients in D7 give it very low toxicity and corrosivity properties and it is odor-free after application making it safe for people and property. D7 is also biodegradable so it does not harm the environment. An example of the difference in corrosion properties between D7 and 10% chlorine bleach is shown in Figure 2.

Figure 2: Comparison of the corrosion of D7 vs.10% chlorine bleach on steel coupons.

The final reason why D7 is so effective against SARS-CoV-2 is that it can easily be deployed by a variety of methods to handle any situation – including both enclosed (i.e., sealed) and unenclosed (i.e., unsealed) spaces. It can be dispersed as a highly stable foam through existing foam generating equipment. When deployed as a foam, it clings to vertical and downward facing surfaces for 30 minutes or more to achieve long contact times against persistent toxic materials including biofilms. It can also be deployed as a liquid spray either through large-scale sprayers or from a hand-held spray can (i.e., BDAS+) which enables rapid deployment within seconds. D7 can also be deployed as a fog (or mist) from aerosol-generating devices primarily for interior decontamination – which is the ideal deployment method for both large and small spaces potentially contaminated with SARS-CoV-2. It is important to note that many gas and vapor-phase disinfectants (e.g., ozone, chlorine dioxide, vapor-phase hydrogen peroxide, etc.) require use in a space that can be completely sealed because they must maintain a specific concentration for a specified time which cannot be achieved if the gas is leaking from the space. Fogging applications of D7 do not require a completely sealed space to achieve successful application. Finally, D7 can also be deployed by wetting microfiber towels and wiping touch points (e.g., doorknobs, handrails, escalator rails, etc.) where SARS-CoV-2 likely resides. Once D7 comes into contact with the virus, either in the air or on surfaces, it is quickly destroyed reducing the risk of infections to people in the area and reducing the potential for fomite transport. Most importantly, when D7 is deployed using any one of these methods, it eliminates SARS-CoV-2 even when it is embedded in soil, organic material, and bodily fluids which renders other disinfectants ineffective.

Figure 3: Multiple deployment for D7 make it highly effective for many scenarios

In summary, D7 is a superior to other products for SARS-CoV-2 disinfection applications because of the following reasons:

For these reasons, D7 should be the primary choice for SARS-CoV-2 disinfection operations. A summary and comparison of properties important to consider for use of disinfectants against SARS-CoV-2 is shown in Table 3. 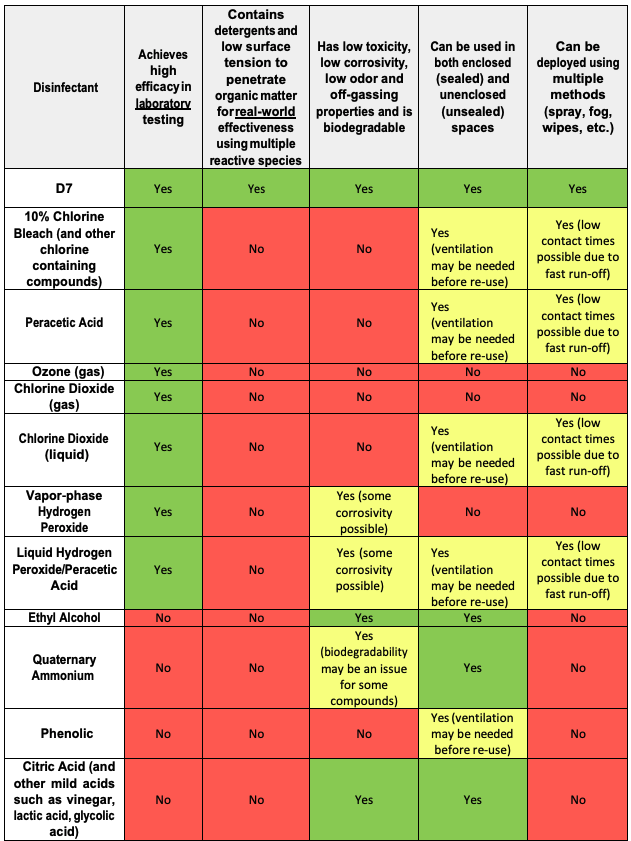