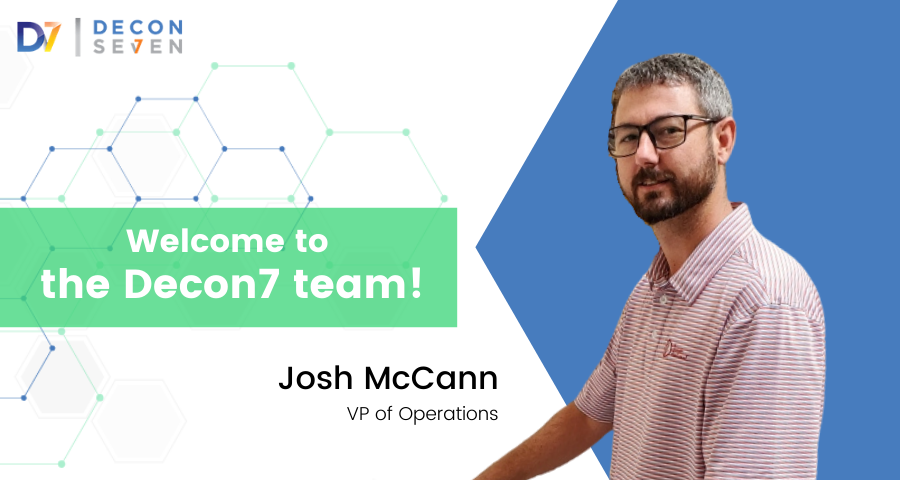 It takes a team of talented individuals to keep Decon7 running smoothly. The latest addition to the company is Josh McCann, who joins us as VP of Operations. We interviewed Josh to learn more about what brought him to the team and what interests him most about his new role.

Josh most recently spent seven years as the VP of Operations at a national commercial flooring distributor that has 15 branches in seven states. There, he specialized in the commercial side of installation and materials. He had a broad range of responsibilities, including supply chain, safety, sales order processing, and more.

Prior to that position, he spent six years in the oil and gas industry, working for the import division of a company in Texas. In his role there, he was responsible for qualifying manufacturers and vendors in China. This experience made him well-versed in the processes surrounding the import of raw materials. Josh also became knowledgeable about ISO 9001 certification and maintained an active membership in the American Petroleum Institute.

His Role at Decon7

Currently based in the Dallas area and commuting to Scottsdale, Josh has taken on the role of VP of Operations at Decon7. Because the demand for EPA-registered disinfectant and sanitizer products has increased, his initial focus will be on creating and implementing processes to streamline production and distribution. He will also serve as the point of contact for the sales and executive teams regarding logistics, purchase orders, incoming and outgoing products, and safety.

The Draw to Decon7

Josh was drawn to Decon7 for multiple reasons. First, he knew some of the other team members, which created a foundation of trust and respect. Second, he has kept an eye on our marketing over the years and appreciates that it focuses on helping people and is not just about the products. This is especially meaningful to him given the current pandemic.

Last but not least, Josh believes in the mission of the company and is committed to providing products that help make people safe. He says, “Decon7 is a superior product, and being able to realistically help people is a neat thing.”

Challenges in the Production Process and Distribution

As the VP of Operations, Josh has a lot to juggle. He sees the highly regulated industry as one of the most challenging aspects of his role, but recognizes that strict regulation is a good thing. Maintaining regulatory compliance requires a lot of steps, and Decon7 rigorously goes through all of them. Regulatory compliance also requires a lot more research and development when creating new products and before sending them to market.

Josh says that managing multiple verticals also comes with challenges in terms of distribution. The food and biosecurity industry is always a moving target because there is constant demand, which can make it difficult to accurately forecast production and distribution.

When it comes to the products themselves, Josh sees the log kill rate as D7’s biggest advantage. With a 99.99999 percent kill rate, D7 hand sanitizer is significantly more effective than competitors that have a 99.99 percent kill rate. As Josh says, “When you’re talking about a million virus cells, those extra digits at the end are very, very important.”

Josh also sees D7’s versatile applications—foam, spray, and fog—as major strengths. They allow customers to get complete coverage when using the product. He finds the fog application especially unique and interesting because it covers air space and can also get into tight corners.

Goals for the New Role

Taking on a new role in a new company is always demanding, but Josh is doing it in particularly challenging times. He seems unfazed by this and is calmly approaching the position with clear goals in mind. Josh’s goals include providing effective communication and clear visibility, especially regarding shipping to our local and international customers. He wants to give realistic timelines, especially because he recognizes the importance of having these types of products and the associated safety data sheets when you need them. To that end, another of Josh’s goals is to have enough product in stock to meet demand.

As for what gets him up in the morning for that weekly commute to Scottsdale, Josh sums it up nicely when he says, “I believe in the vision and the mission at Decon7. It’s more than a company. It’s about actually getting products out that make people safer, not just about sales and revenue.”

To learn more about how you can use D7, and EPA-registered disinfectant in your facility, read The Decon7 Guide to Coronavirus Disinfection in Commercial, Industrial, and Public Facilities.